In my day job, I consult with a wide spectrum of clients – CxOs, CIOs, Enterprise Architects and technology leaders. Besides discussing their technical challenges, some want to bounce ideas off me and discuss current trends I see elsewhere. During the past few months, the buzz on cloud computing has got louder, almost competing with another technology fad: Green IT. For business folks, excitement over Cloud computing seems to be on the TCO, and potential cost savings.

For those of us in the industry, even with a few grey hair, cloud is yet another avatar of the earlier fads: E-Commerce, dot.com Hosted solutions, Application Service Providers, (ASPs), On Demand, Software as a Service (SaaS) etc etc.

To some in the software community, cloud is a way to abstract the complexity, example the cartoon from a software services vendor’s newsletter 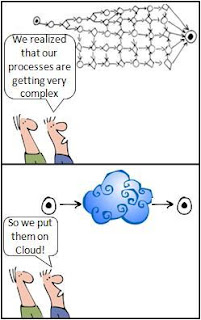 The cartoonist certainly has a dry sense of humor, implying an approach similar to my wife trying to drape a blanket over the clutter in our bedroom when we are expecting visitors. Abstracting problems to the cloud only shuffles the burden over to others, say a vendor, rather than solving it; a bad case of outsourcing if you will.

It is interesting how IBM, HP and Oracle seem to be strengthening their position as a one-stop-shop when it comes to computing, offering hardware, software and services as a seamless service (a.k.a cloud?) to customers. While this happens, Offshore service providers - Infosys, TCS, Wipro - seem to be equally excited about the potential of Cloud computing. However, it is not clear if some service providers are merely tweaking their core service offerings – army of programmers offshore working on software solutions for western clients – to rebrand them as "cloud offerings".

If one had a crystal ball, one would be peering to see if Cloud Computing is just a pie (or cloud) in the sky or actually an accumulation of thunder clouds that will produce monsoons.
Posted by Mohan at Friday, April 30, 2010 No comments:

Email ThisBlogThis!Share to TwitterShare to FacebookShare to Pinterest
Labels: technology

Musings on the dark underbelly of Global Adoptions

Adopting a destitute, needy child with the promise of providing a warm, caring home and future to him/her is among the noblest things one can do. Reading the recent articles on the Russian adoption saga brought back to mind the story of adoption by friends in Colorado Springs, CO where I lived years ago.

I had an opportunity to observe Kumars (pseudonym) go through the ordeal of adopting a child from India. Though I call it ordeal, the story had a happy ending since the Kumars ended up adopting not one but two children: a girl of 8 and a little boy of two, completing their American dream. Before they could adopt, however, they had to jump through several hoops. For one, the couple was of Indian origin with American permanent resident status. Intent on adopting a child from their native culture, they made several trips to India and spoke to experts and consultants in the US.

The couple discovered that one of them had to naturalize as American citizen before they could adopt and sponsor visa/green-card for a child from abroad. Spouses and minor children of Green card holders have an excruciating wait before they are eligible for a US visa. On the other side of the globe, they found that an American citizenship could be a liability when it comes to adopting Indian children. Just being a person of Indian origin is no substitute for Indian Citizenship when it comes to paperwork, especially since India still doesn’t recognize dual citizenship. The workaround, the Kumars found was that Mr. Kumar would naturalize as an Amercan Citizen while Mrs Kumar would continue to retain her Indian citizenship and Green Card. They had to become an Indian-American couple.

Though India has a lot of orphanages with destitute children, adoption agencies, at least the genuine ones go by the letter of the law. And the legal system in India can be painfully slow, especially if the parents happen to be Non Resident Indians (NRI), hold foreign passports and intend to take the child out of India. The excruciating wait can test the will of all but the most spirited prospective parents.

A few years after they began the ordeal of international adoption, the Indian American community had an opportunity to welcome the new members to Kumar’s family at a nice little reception. It was a wonderful experience to observe the Kumars experience the joy of fulfilling the dream: successfully adopting and having a child, in this case two children, in their home. It has been over 9 years since the Kumars adopted. I moved from Colorado but thanks to online social-networking, I kept in touch with the Kumars. The kids went to school and the elder ‘child,’ the girl is getting ready to go to college and live the American dream.

I guess not all Adoption stories have the same happy ending as that of the Kumars. Given the emotional roller-coaster one has to go through, prior to, during and after adoption, adopting a child from abroad can also be among the most excruciating decisions. One can imagine that adoption can also be hard for the child that comes from a different culture, probably from a broken family with few dreams of its own.

It is hard for one to speculate on the rationale behind going through the trouble of adopting a child from Russia, getting the necessary paperwork, visas, immigration etc bringing the child over . . . and then unceremoniously putting him on a one-way flight back ‘home.’ The saga has lot more questions than answers: If a toaster from Wal-Mart does not meet one’s needs, one can walk back and return it within 30-days, no questions asked. Is adopting a child like buying a toaster at Wal-Mart?
One wonders if ‘international adoptions’ should be banned; or more tightly regulated? Adopting children from across geographic boundaries brings its own challenges, especially of language, culture, law etc. At the very least, credentials and background of prospective parents should be scrutinized more than it currently is.

It is the day-two of the volcanic eruption in Iceland, leading to the worst imaginable case of Butterfly effect in Europe and even rest of North America. I was flying out of SFO this morning and on the air-train ride from the rental-car station, I noticed a couple of Air France and British Airways 747-400s parked away from the terminal and I realized these were among the stranded planes unable to get out to Europe that I had heard about on the radio, on the way in. Of course, the ripple effect is obvious:


The road-warrior in me can empathize with the plight of stranded passengers flying back from work/projects to families, to holidays or for critical business meetings.

A few years ago when I wrote the chapter on external factors impacting global business in my book, I called out some of the key aspects of “External Landscape” on the business of Offshoring. If I were to revise the chapter, I would probably add a section on how Volcanic Eruption in Iceland caused global Travel disruptions, impacting business travelers – techies and managers flying to/from Europe, to/from North America via Europe, stranded for days at Airports or their base locations.

Even with all the Hollywood movies and themes we have seen, not many would have imagined this. And of course, Force majeure clauses and Travel Insurance policies may not have called out impact on travel and flights due to Volcanic ash. I guess this is the stuff real life is made of?!

Bloggers on the topic:
* WSJ: Volcano Insurance, Anyone? Don’t be surprised if European insurers introduce new volcano-related insurance coverage for the airline industry in the coming weeks.
* The storm buffeting God's Rottweiler
* Volcano fallout: Many flights from LAX to Europe canceled
* Smoked Out: Why Volcanic Ash and Planes Fight for the Same Small Airspace
* IATA: Volcanic ash is costing airlines more than $200 million a day
* Will your travel insurance cover problems caused by volcanic ash?
* Iceland Volcano Jams Eurostar
Posted by Mohan at Friday, April 16, 2010 2 comments:

Risks of dependence on Coal: engine of globalization

While I was musing on our dependence on energy and oil this weekend, Coal was far from mind. Recent mining accidents in two corners of the globe - West Virginia, USA and XIANGNING, China - have brought home the point: Though we wish to “go green” the world is still dependent on Coal for energy. And sometimes the human cost is (literally) paid with the lives of miners.

Coal Miners in Virginia and China RIP!
Posted by Mohan at Wednesday, April 07, 2010 No comments:

There were two distinct news items this week. One was the opening up of offshore drilling by the Obama administration. The other was announcement of new mileage rules of cars and autos. These two moves are expected to help their bit towards energy security in the US, and to some extent help Americans lead the debate on global warming and greenhouse gases.

While a step in the right direction, one thinks: is it too little too late?

The target is to raise the average mileage of new cars to 35.5 miles per gallon by 2016. This converts to about 14.88 Kilometers per liter (KMPL). Translate this to another context, the ubiquitous motorcycles and scooters in Asia, used for commuting by masses average anywhere from 60 - 100 KMPL


American cities and lifestyle is designed on having the mobility that automobiles provide, more than most other countries in the world. During the past decade, I have lived and worked in India, UK, Canada, Europe (Switzerland) and traveled extensively to most metros in the US. In cities around the world, I have been able to manage to commute comfortably in busses, trams, metros, trains and other modes of public transit. Not so in most metros in the US (with possibly the exception of New York City). Much against my will, I have to rent cars and add my bit to emission greenhouse gas emission in the US. While, like most other Americans, I love the flexibility that an auto can provide, driving for commuting to work is generally a chore than a pleasure.

Europeans and Asians live in denser urban areas, closer to city hubs, relying heavily on public transit, which are inherently ‘greener.’ And it is not even fashionably been but a very practical way of life, designed by town/city planners. Most Americans don’t have this choice even if they wanted to.
Posted by Mohan at Saturday, April 03, 2010 No comments: