Yet another suicide: unsung victim of COVID shutdown and downturn

We have all been reading about the impact of COVID-19, shutdown and financial loss suffered by millions. The story hit closer home recently when a neighbor committed suicide.

The victim was our neighbor Babu, a 40-something techie working for a multinational at a Tech Park in Bengaluru who also had a thriving side-gig: investing in real estate with his brother-in-law who is a local contractor.

The Babu family is well-to-do - by Indian middle class standards - with a couple of houses and plots that his dad and uncles had invested-in a generation ago. During the past couple of decades, their properties had grown in value exponentially, and Babu had mortgaged the properties to invest in additional real-estate projects.

On the surface, Babu led a fairly normal middle-class life with his wife and young daughter. His parents in their eighties, lived with them in their old duplex house that Babu had built a couple of decades ago. He had also built a couple of shops on his property facing the street that was let out, generating additional income. Babu’s only sister, married to the contractor also lives a few blocks away and the families would frequently meet up.

Our subdivision is adjacent to a private mega-university that has been expanding considerably over the years. Many independent houses and plots in the neighborhood have been converted to commercial enterprises including multi-story Paying Guest (PG) complexes that accommodate the influx of out of town students.

A couple of years ago, Babu and his brother-in-law decided to jump the bandwagon and tore down a couple of old houses that the family owned in the area. Babu financed the construction of the multi-story PG complexes spanning 200+ rooms, and the construction was supervised by his contractor-BIL.

The project took nearly two years to complete and they had a grand inauguration in February. And then came COVID-19 and the lockdowns.

The buildings remained vacant for the next six months while Babu began to struggle to pay off his loan and mounting interest. During the past few months, he unsuccessfully tried to liquidate a few other properties that the family owned, and Babu continued to fret over the complex web of finances that were starting to unravel.

Last weekend, Babu’s wife went to visit her parents with their daughter and on returning found him dead, hanging from the ceiling fan. 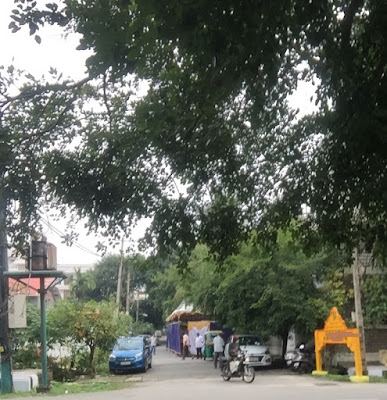 The family quickly corralled together to finish the inquest and funeral, but this incident didn’t even make the local news.