It has been a really interesting past few weeks in the mobile world, and to watchers of Bring your own Device (BYOD) the trends spell interesting challenges and opportunities.

A lot has been happening in the smartphones world - iPhone 4S is continues to gain popularity, increasingly price-competitive Android smartphones, improving Windows smartphones are enticing consumers. And iPad continues to be the tablet of choice for consumers. Though I am hesitant to use clichés, I think we are at a strategic inflexion point in mobile computing and BYOD. Perhaps the began in 2007-08 when the Apple iWave began upending Blackberry as the de-facto device for mobile workers. iDevices helped consumers visualize how smartphones could help mobile workers do a lot more than just read emails-on-the-go.
A few interesting happenings just in the past couple of weeks are worth analyzing in greater depth (beyond a blog like this):

While the two tow tech giants make moves extending their reach in the hardware space, Research in Motion (RIM), maker of blackberry announces a delay in launch of BlackBerry 10 mobile OS (and other financial challenges the company is facing)

What does this mean to us? While the employee-and-tech-consumer in us wants a broader, faster corporate push towards BYOD, the Enterprise Architects are going to try and address the ROI and TCO questions around such a moves.
Several recent reports are pointing to BYOD and how it is pushing up IT costs. The question to be weighted: Is whether the increase from BYOD just another cost of doing business or a cost of convenience?!
Posted by Mohan at Friday, June 29, 2012 No comments:

Power of loyalty, frequent flier status, and losing it all

Listening to NPR radio last week, I heard an interesting interview with Jacques Vroom on his experience flying over 40 million miles using “unlimited first-class” travel pass.
With a transient, nomadic life, it is natural for consultants to crave the few perks available to them: the “elite” status at airlines and hotels, and the miles and points that come with the status; kind of like George Cloony’s character in the 2009 movie Up in the Air (re my blog)
Mr. Vroom’s story of travel, status and the fall-from grace fascinated me all the more since I too had enjoyed elite status with a few airlines (Platinum Medallion with Delta and United Airlines) and hotels (Platinum status with IC Group and Marriott) and rental car companies (President’s circle with Hertz last year) 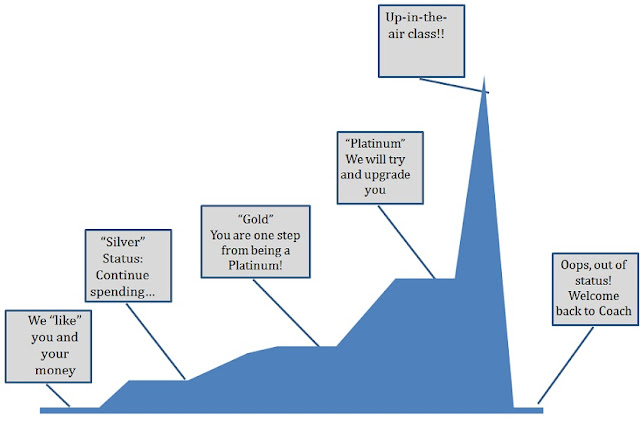 There is another aspect of Mr. Vroom’s story that former-frequent-travelers including self can relate to: the abrupt end to perks when one loses the an elite status. In the past six months since transitioning from a consulting role, I have seen my travel reduce drastically. With that comes the gradual erosion of my elite status with Airlines and hotels. (graph above).

I still have hundreds of thousands of points in my accounts which are sure to fizzle away soon...

As we enter the middle of 2012, the global economy continues to stagnate and even the erstwhile darling of stock market – tech sector – begins to flounder. The butterfly effect seems to be hitting technologists at both ends of the spectrum - entrepreneurial and software services.

Last month it was the Indian software services darling (my erstwhile employer) Infosys, warning of severe headwinds in the global technology services sector. Then it was technology giant Hewlett Packard announcing massive job cuts. And then came the mother of all IPO’s of tech darling Facebook and its spectacular post-IPO-stock-fizzle, leaving most of us in the globalized IT world wonder whatsup?

While the macro-economic factors play out in the business of technology management, interesting conversations on Developeronomics continues to stir among the Digerati. The debate was triggered by Marc Andreessen’s essay in Wall Street Journal: Why Software Is Eating The World. Marc espouses the theory that “we are in the middle of a dramatic and broad technological and economic shift in which software companies are poised to take over large swathes of the economy.” The techie in me loves this argument though I still wonder if we are really seeing a Technology Lead Innovation around us or Technologists playing catchup? (my earlier blog)

Marc ends his essay with key challenge facing software economy “Qualified software engineers, managers, marketers and salespeople in Silicon Valley can rack up dozens of high-paying, high-upside job offers any time they want, while national unemployment and underemployment is sky high.” Although he doesn’t say it in as many words, the challenge Marc highlights is more about the dearth of Über coders, while the world – or at least the offshoring world – continues to produce thousands of code coolies.

Although the use of term code coolie may sound a bit derogatory, it really is intended to drive home the point that vast majority of coders are developing software as a means to earn a living. They do it as a vocation rather than with a passion to enable software to “change the world” in a significant way. Remember the storm in a teacup when the Indian writer Chetan Bhagat tweeted on "Narayana Murthy runs a body shop?" Of course, graduating a hundred thousand techies in a decade is no mean feat. And that is just Infosys. Add TCS, Wipro et all and one can see the challenge is really not about the ability to get a critical mass of coders.

Then there was an interesting piece on “The Rise of Developeronomics” in Forbes, which took a broader perspective on IT development and developers stating “If the world survives looming financial apocalypse dangers at all, this is the one investment that will weather the storms. It doesn’t matter whether you are an individual or a corporation, or what corner of the world you inhabit. You need to find a way to invest in software developers.”

Businesses have already taken note of the importance of software developers though many leaders are trying to crack the core problem: bridging the long tail of code coolies to the few Über coders around. To create a successful eco-system where thy can not only coexist but can also thrive. To take an anology from another domain, it is akin to identifying the right general to lead the army to battle.

This question of variance in productivity between the best programmers and average coders has been debated ad infinitum by the software community. However, it is not just about recognizing variance in productivity but to ensure the right mix. As the Joel Spolsky blogs “it's worth hiring Angelina Jolie for your latest blockbuster movie, even though she demands a high salary, because that salary can be divided by all the millions of people who see the movie solely because Angelina is so damn hot.”

What does all this mean to us?
Blogs and references