This weekend, we decided to drive down to Hesaraghatta Lake, which is a nice place for a weekend getaway. We left home around 10 am and reached the Lake by 11 after a detour around the scenic Hesaraghatta Main Road that connects Jalahalli to Hesaraghatta. The road is well maintained and is lined with small farms and plots of agricultural land, and is not very busy.

There is a well paved walkway and lookout around the south side of Hesaraghatta lake. 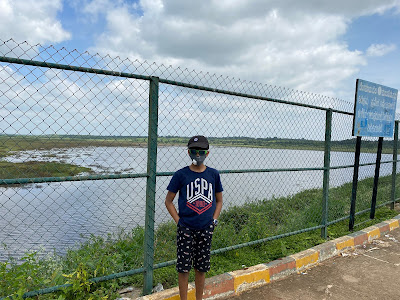 Hesaraghatta Lake is approachable by road from Bengaluru at a distance of 26.5 km to the north-west of the City. It is a manmade reservoir located 18 km to the north-west of Bengaluru. The lake was created in the year 1894 across the Arkavathy River to meet the drinking water needs of the city. Sir K. Seshadri Iyer, the then Dewan of erstwhile Mysore state and the then Chief Engineer of Mysuru, M. C. Hutchins, planned to build the scheme called the "Chamarajendra Water Works" to store a three-years' water supply to the city.

Reports and articles about Lakes around Bangalore