Reflecting on wealth creation in the era of Offshoring IT Services

Topic of money dollars and fortune never get boring. Even after one thinks he has read every possible angle to a story of wealth creation there is another angle or review that knocks ones socks off.

As a shareholder, I was reviewing the invitation for the 40th Annual General Meeting of Infosys Limited this weekend, and “section 7” caught my attention (link to the report). This section highlights the aggregate shareholding of the promoters and promoter group. 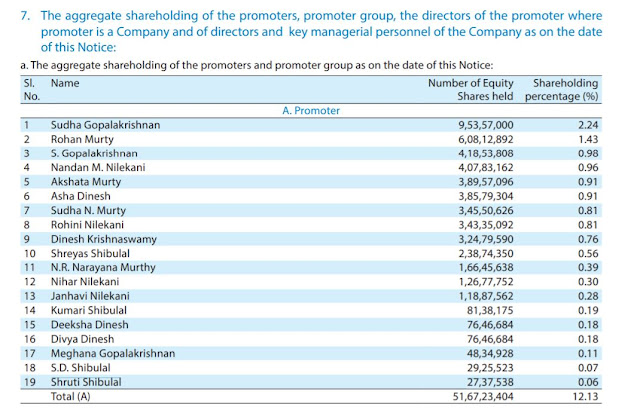 The list in "section 7" includes the famous founders, their spouses and progeny, each holding hundreds of thousands of shares of Infosys. The company’s shares have been hitting record highs and is trending at about ₹1,450 (As of June 2021). At the bottom of the list at #19 is the lowest of the promoter group who owns about 2737,538 shares worth about ₹ 397 crore (about $56.7 million).

To their credit, Infosys’ founders seem to be living by the original corporate motto “Powered by Intellect, Driven by Values.” The founders, while making immense wealth for themselves have shared their fortune with employees who signed on early. And some of us who joined later in the game didn’t do too badly either. As a former employee who spent a decade with the company in the 2000s, I fondly look back on the small fortune in ESOPs vested in stock that is accruing in my nest egg.

A brief history of time: Wealth creation beyond Offshoring IT Services

Infosys, along with its peers TCS and Wipro defined and scaled up the business model around Offshoring IT Services. Outsourcing IT work by multinationals to lower cost nations like India really took off after 2000. Consequently, the valuation of these and other service companies skyrocketed, making the founders uber rich.

Q&A in Tech forums and social media routinely feature young techies who ask about pursuing top-dollar jobs, and a few aspire to be entrepreneurs. While software product companies in 2021 attract top talent by offering USD equivalent salaries in India for talented techies, the real wealth is still concentrated at the top of the pyramid.

Billion-dollar valuation and millions in personal wealth is the stuff urban myth is made of. A quick review of “India’s richest tech billionaires in 2020” shows this was true for the IT services boom in 2000s, as it is for the digital waves that have followed.