Dear Indian, you want to exit the Chinese Dragon? Easier said than done!

This week, Indians watched footage of gruesome hand-to-hand combat between Indian and Chinese soldiers in the inhospitable, high-altitude terrain in Galwan Valley, the "Chinese occupied" part of Laddakh. After watching video snippets of Indian soldiers brutally attacked with iron rods and clubs, passions in India are running high.

While most Indians await the government’s promised military retaliation for the killing of 20 of its soldiers in Laddakh, there has been a rush for a grassroots movement to boycott Chinese goods, services and investments.

Rush to boycott “Made in China”


The clamor to boycott Chinese goods began even before this week’s gruesome killing of Indian soldiers. Amul’s long running advertisement campaign, that is known for its timely reaction to current events had its Twitter account briefly blocked in early June after its anti-China message “exit the dragon?”

China has been fledgling its economic muscle around the globe and its economy is largely dependent on exports. With nearly 11% of its imports coming from China, India currently has a $59.3 Bn (£47.7 Bn) trade deficit with the Dragon. Therefore, there is an argument to be made for an economic retaliation.

Plan for an economic retaliation?


Anti-China protests have broken out sporadically all over India, with effigies of the Chinese leader, Xi Jinping, set on fire. The Indian news outlets have begun carrying footage of local political leaders and activists going from shop-to-shop handing out pamphlets about boycotting Chinese products. 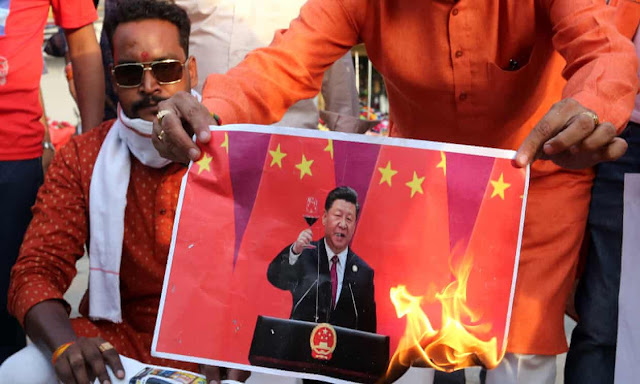 The central government, sensing the mood of the public has jumped on the boycott Chinese bandwagon. After the attack on its soldiers this week, the central government ordered telecom providers (including BSNL) and other private companies to ban all future Chinese deals and equipment upgrades. Chinese companies will also be banned from participating in tenders for future projects, which is likely to include plans to upgrade 4G services in India. (NDTV Article)


The Chinese have a direct or indirect footprint on almost all the products, gadgets and service you touch. If you look around you, you can probably spot trinkets, household gadgets, smartphones and computing devices that are marked as “made in China,” which are easy to identify (and target for boycotting). However, identifying products and services from startups and Indian enterprises may not be as easy as it seems.

Does #BoycottChineseProducts include boycotting these startups that employ hundreds of thousands of Indians?

Most multinationals make and assemble products with complex supply chain that includes manufacturing of components in dozens of countries that include China. These components travel from one Distribution center to the next across geographic boundaries before being assembled in a specific country.

Products that we associate as American or European like Apple’s iPhones, iPads, Amazon’s Kindle or even Levi's, Nike and Adidas’s apparel are all either assembled in China or made with Chinese made components.  Identifying the ‘country of origin’ of products or even components that go into assembly of such end products is not as easy as it sounds.

And then there is a matter of practical consumerism that is hard to wean away from. For example, OnePlus, a China-based smartphone maker, saw its latest model sold off within minutes in India this Thursday, despite growing calls for boycott of Chinese goods following a border conflict between the Asian neighbors.

Bottomline: While #BoycottChineseProducts makes for a nice sound-bite, and a few local politicians, activists and digirati will get a 15-minutes-of-fame ripping up a “Made in China” trinket, these actions may not have real economic consequences on Chinese exports or China’s trading surplus with most nations.

A week ago, I heard that Gopi, the neighborhood cable guy had been electrocuted while surveying cables tangled on the roof of a house nearby. He suffered sever burns, and after a couple of days in the hospital, he passed away.

I was saddened to hear about the tragic death of the affable 26-year-old who worked hard to keep the neighborhood cable operations running.

After a sever thunderstorm, customers had complained of cable outage and Gopi had gone to the roof of a house in the neighborhood to check the wires. The severed cable wire had apparently tangled over a live electrical wire on the railing. When the unsuspecting Gopi tried to remove the untangled cable, he was instantly electrocuted. 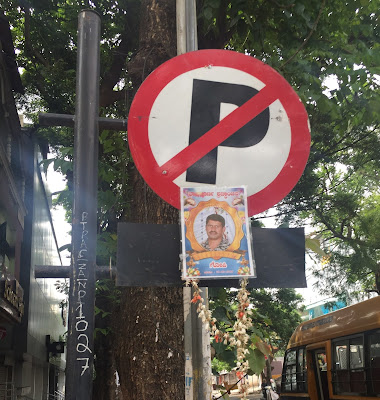 RIP Gopi: DOD: 4 June 2020 (Sanjay Nagar area, Bengaluru, India). After Gopi's funeral, neighbors came together to hold an impromptu memorial. Some laminated a printout of his obituary and posted it on poles near the cable operator's office.


In urban India, it is all too common to see broadband and television cable wires hanging over electric poles and running over rooftops of houses and buildings nearby.  It is common for such tangling of wires to lead to frequent accidents and electrocutions. According to a TOI article,


Every year thousands of Indians are getting electrocuted in freak accidents on streets dotted with damaged power cables. In 2015 alone, 9,986 electrocution deaths were recorded across the country with Madhya Pradesh, Maharashtra and Rajasthan each witnessing over 1,000 casualties, according to latest data available with the National Crime Records Bureau.

Encroachment in the neighborhood. Experience with #BBMP Sahaaya : Thumbs up for the response

I recently came across an 'encroachment' on a covered Storm Water Drain in my neighborhood, and as a conscientious neighbor, decided to act on it rather than just mull it over.

This was a rather blatant attempt to encroach on a public land on a busy thoroughfare. New BEL Road, for those of you know North Bengaluru, has morphed into a rather tony commercial thoroughfare.

Someone or a group had decided to encroach on that prime space and erected a 'structure' on the foot-path facing the main road. Left un-attended, the folks would soon start a shop/commercial enterprise, and the illegal structure would eventually be accepted as a part of the landscape. 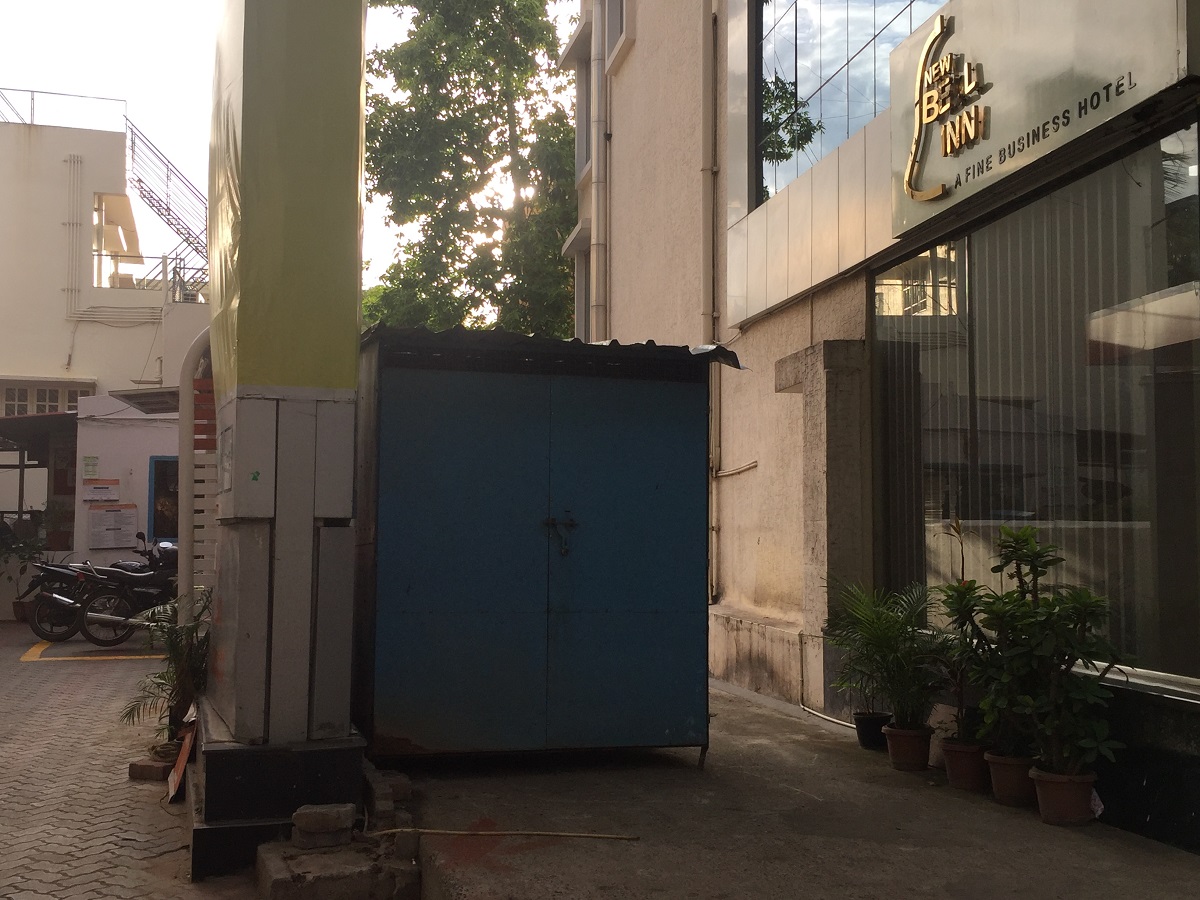 I started by logging a complaint and uploaded a mashup of the picture and google-map location, briefly explaining the problem.

I got a SMS notification about my Grievance#:200369xx that had been logged. During the next few weeks, I continued to get messages on my smartphone while the Grievance was escalated through their hierarchy.

During the past couple of weeks, I also got a call from a couple of officials confirming the location of my complaint. I explained the details of the issue and landmark to the oficials. 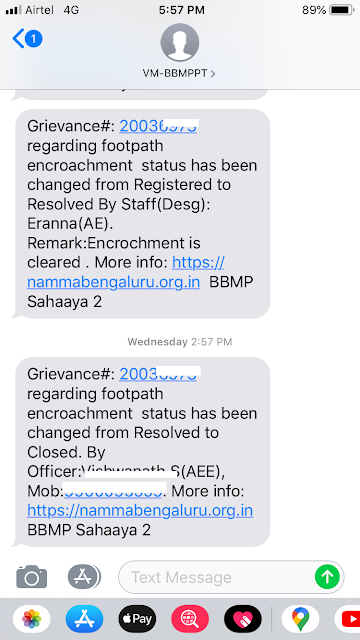 I eventually got a message "Grievance#: 200369xx regarding footpath encroachment status has been changed from Registered to Resolved By Staff(Desg): Eranna(AE). Remark: Encrochment is cleared ." During my recent walk by that area, I noticed that the structure was indeed gone! 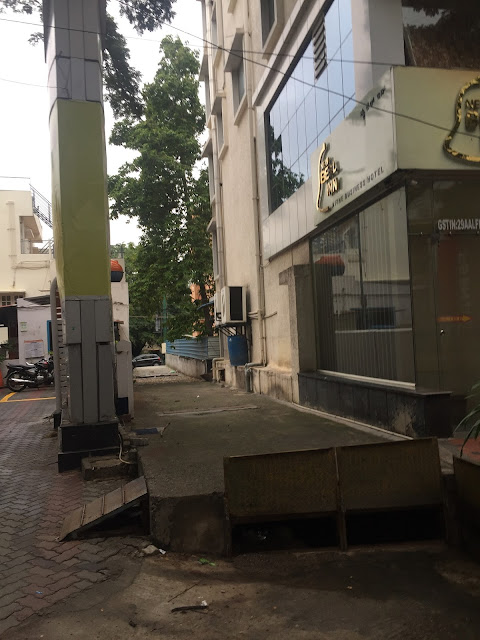 Kudos #BBMP Sahaaya and the team for acting on a resident's complaint. Let's keep our neighborhoods clear of encroachments !