Ethics and Globalization of Businesses: Business Government and Society 101

Harvard University recently Prof. Nitin Nohria as dean of its influential Business School. Prof. Nohria has been active in promoting business ethics, a value that seems more relevant now than at any other time in the past. This move by a premier business school is timely. There is an urgent need for business leaders to learn to focus on crisis management and to reflect on their values, ethics and transparency. Business, Government and Society 101, along with fundamentals of ethics and transparency is (or should be) required reading for future business leaders. Case in point is the automotive value chain where crisis after crisis seems to be playing out in the global circus 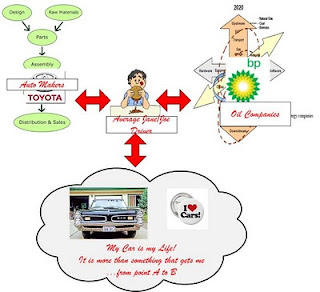 A year after major auto makers in America went bankrupt, prompting the federal government to step in and bail them out, Toyota was making headlines with runaway cars and quality problems. This month Toyota ceded its spot on national headlines to BP.

Managing crisis while in a global media spotlight is not an enviable task for any executive. A few facts, based we are seeing and reading in the media:
* BP says it will pay for Gulf spill's cleanup. It is certainly pulling all the stops in crisis management. Too bad the attempt to use the oil containment box technology failed this week, right in front of us and the global media
* The US Government and most other major oil companies are pooling in resources, technologies and brainpower to attempt a solution. It is a matter of time, but till then we will continue to watch the drama unfold

Observing the drama in the Automotive industry unfold, I began reflecting on how technocrats in my industry - the offshoring tech sector - got a first-hand lesson in Business Government and Society during the restructure of offshoring giant Satyam after the accounting scandal a couple of years ago. A few key lessons in crisis that could apply in most scenarios:

Bottomline: Though it is too soon for us to be looking for lessons in the current crisis, managers of tomorrow are certainly looking to learn their way out of disasters
Posted by Mohan at Friday, May 07, 2010