The talk of bureaucratic bungling, cronyism and red-tape is among the few that can get people of South Asian Diaspora really animated. Most of us would have a story to tell, here is another to add to the list.

In the past, part of the woes, when it comes to issuance of passport in India used to be blamed on the lack of Information technology. Then Tata Consultancy Service (TCS), the largest India based offshoring firm bagged a multi million dollar project a while ago, raising expectations among the tech community. (Ref Article)
The Passport Seva Project is an e-governance project of the Indian government which is supposed to streamline and bring efficiency in the process of distribution of passports. The contract for implementing the project, worth Rs 1,000 crore (Rs10 billion or $21.4 million) was given to information technology major Tata Consultancy Services in October 2008, with an implementation timeline from June.

The automation still seems to be undergoing teething troubles. A popular Bangalore based blogger, Mohan Nellore, posted his views on the blog “Passport Renewal through Seva Kendra” that generated hundreds of comments.

My wife decided to renew her Indian passport during a trip to India, which should have been a straightforward affair. Especially since she already had a couple of renewals in the past years, and there was enough paper trial and passport booklets from the past.

After submitting the application for passport renewal, while reviewing the status of application online, Sujatha discovered that the “Gender” column had been wrongly entered as Male. (ref screen print below). My joke (sic!) regarding the passport officials unilaterally deciding that she had a sex change fell flat. 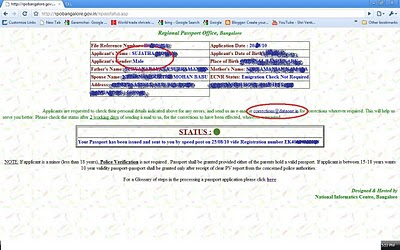 On discovering the error, she sent several emails out to the mail-id’s listed on Bangalore passport office website. All of them bounced back with a ‘server error’ (Not sure if Passport Office has sourced the maintenance of those servers to our friends at TCS?). Since the hi-tech route failed, my wife had switch to the traditional way of dealing with Indian bureaucracy : She rushed to the Passport office in Koramangala, stood in the queue and submitted a letter requesting that the error be fixed before the passport was issued. She was assured by the counter clerk that it would be done.

A few weeks ago, she received her passport, and we weren’t too shocked to note that the mistake had not been corrected. Again a rushed trip to the Passport office and meeting with the Assistant Passport officer, who put in an endorsement on a “correction form” saying a new passport would be issued with correct details.

Yesterday, my wife again receives the same passport, with incorrect details, with a typed note stapled saying Passport office couldn’t take on the responsibility of error due to online data entry, and that she would have to pay the fee again and re-apply. I think this is one of the most preposterous excuses a bureaucrat can use. Passport office’s own website says:

This step was obviously missed. The clerk at the passport office who typed and stapled the note to my wife’s passport with incorrect details was trying to cover his/her back since they probably report on the number of ‘errors’ and passing the buck is easier than owning up and helping Citizen.

Needless to say, Indian passport officers and officials like most of the Bureaucracy think they are not accountable to anybody; and not the least citizen, in this case Non Resident Indian citizen who provide much needed Forex remittances to the economy.

I am sure my friends at TCS are burning midnight oil to streamline the business process and trying to define a robust Enterprise architecture for the passport services for a billion people. They probably could explain away my wife’s ordeal as an inadvertent “human error.”

Not sure if you have suggestions on cutting through this bureaucratic mess?

Update: There are a few "techniques" adopted commonly in India when it comes to dealing with bureaucracy and red tape. This includes bribery (when possible), pulling strings (again when possible) or finding a friend/cousin/associate who knows somebody in the department concerned.

Posting my two cents on this blog is not the only thing I did. I continued to explore all the three options. Thankfully, the third Indian-Option-of-dealing-with-bureaucracy worked out for us. A friend of a cousin knew someone in the Passport office in Bengaluru, who was willing to pull a few strings to ensure a corrected passport was dispatched in a day!