Just a few weeks ago, when I would go to linkedin seeking updates on what my colleagues/peers and others were up to, I would be pleasantly surprised to see notifications on job change, announcement about something cool and such.

Of late, about 80 to 90%% of the notification are about “XYC’s skills and expertise were endorsed by: ABC”  Maybe it is it just me getting a bit irked; but my linkedin login page seems to be buzzing with announcements of all my connections endorsing each other. It is starting to get annoying!

What exactly is an endorsement? The dictionary defines Endorse as

a : to approve openly
b : to recommend (as a product or service) usually for financial compensation

Sure, being endorsed by a colleague was probably a cool idea to begin with. S/he should know a bit about my skills and expertise and an endorsement values and recognizes it. David Breger in his blog introduced endorsements a few months ago as “a new feature that makes it easier to recognize them for their skills and expertise.” And since then it has moved from being cool to annoying to meaningless… all in a span of months! Mashable oped echoes the thought “The idea was that rather than go through the trouble of actually writing a Recommendation, you could merely check off a box. Think of it as a Facebook "Like" for business skills.”

Now, it almost feels like a Linkedin ploy to make us really really lazy! An annoying popup displays every time one visits a colleague/connections’s profile 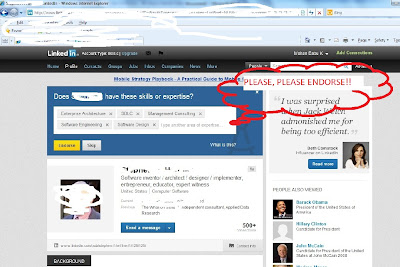 The popup is designed to evoke sympathy; like please, please, please endorse xyz! Most of us, end up feeling guilty and click on “endorse” before moving on. And like I said earlier, the value of such sympathy click is meaningless!
Posted by Mohan at Thursday, March 14, 2013