30-60 Children die at Gorakhpur Hospital: Musing on the heartlessness of business, administration and politics

Reading about the shocking incident at a hospital in the Indian city of Gorkhpur sent a shiver down my spine. Parents of the kids with various ailments who were admitted at Gorakhpur’s Baba Raghav Das Medical College Hospital allege that oxygen supply for the patients was turned off as the vendors’ bills for the supplies had not been paid by the state government.

Initial media accounts published notifications received from vendors - Pushpa Sales Pvt Limited, the company which supplies liquid oxygen to the Hospital. According to letters from the vendor, Pushpa sales had decided to stop supply of oxygen cylinders to the hospital since its bills hadn’t beenpaid for past supplies (link):

# “The delay in payment is reaching six months… in case of further delay, the entire responsibility would be of BRD Medical.”
# “We would be unable to continue supply… in case of non-payment of dues… it would not be our responsibility.” 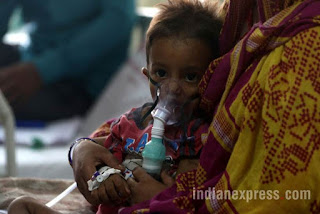 Pushpa’s managers probably approached this as yet another business transaction: A vendor threatening to or actually stopping supplies when past bills are overdue is a common business practice. It is shocking to imagine how the managers didn’t stop to think that the supply of the ‘goods,’ (oxygen cylinders) would literally lead to life-and-death consequences.

The incident has generated a huge political storm with the media and digerati weighing in. While parents allege lack of oxygen supply as the root cause, the hospital administration is taking cover under obscure medical records by stating ‘each case of death is unique and different.’ (link)

Having lived and worked in a dozen countries around the globe, I can understand - but still not empathize – with the constraints under which middle-managers operate. Unpaid bills of over 40 lakh rupees -nearly US$80,000 as the media reports indicate - is not a small amount by Indian standards. One can guess how a middle-manager at Pushpa Sales might have been under tremendous pressure to have the bills cleared. Perhaps his job was at stake too, and he decided to stop supplies to ‘threaten’ the hospital administration as a last resort.

Similarly, hospital administrators are also business managers accountable for Profit and Loss and general operations and surely must have tried to ‘resolve’ the impasse. In all this, did they stop for a minute to think: the ‘goods and supplies’ in question are oxygen cylinders destined for a children’s ward were helpless, innocent children might actually DIE if they didn’t receive the intake of oxygen? Post mortems and review of records will eventually unearth the truth, but by then the attention of the media and digirati would have moved on. The hapless parents will be left behind trying to reconcile the loss, eventually attempt to come to grips with it.

As a father who lost a child years ago, my heart goes out to the grieving parents. No parent should have to go through the tragedy of burying a child. It is just not right.

Human lives are too precious to be squandered because of corporate greed and ineptitude of hospital administrators.
Posted by Mohan at Saturday, August 12, 2017