Yet another unsung victim of COVID19: RIP Krishnappa

I heard of the passing of Krishnappa yesterday - yet another unsung victim of COVID-19 that has claimed thousands of lives across the country, and millions globally.

Krishnappa was a friendly neighbor who would make small talk with me and share local news and happenings in the neighborhood.

Although it was shocking, like every death, it wasn’t unexpected given that Krishnappa had been hospitalized and was on a ventilator for a week, gradually going downhill. A couple of weeks ago I realized he was ailing when he came to collect coconuts we had gathered from our tree - his dry whooping cough was a dead giveaway though he was mobile and tried sounding ‘normal’. This was a few days before he officially tested “positive” and had to be hospitalized.

In his mid-sixties, Krishnappa and his wife were living a typical middle-class dream – kids and family living nearby, grandkids going to a decent private school. The pandemic cut short his life rather hastily. 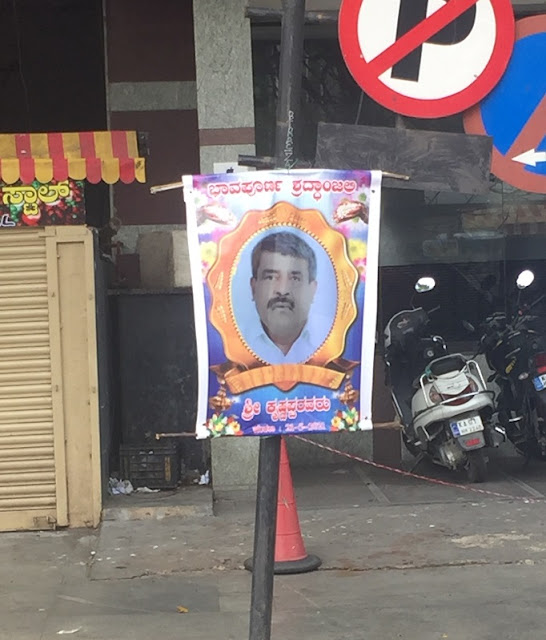 Krishnappa and his wife lived off the rent from a multi-story house built on a small plot a couple of rows opposite our house. He lived in the ground floor with his wife and a son and had let out the 5-6 rooms on the two floors above to students from a nearby university. He had gifted a part of his plot to his daughters who had built another multi-story house where they lived with their families.

He also owned a private-auto that he would drive around. In the mornings he would run errands - buying greengroceries and supplies for other Paying Guests (PGs) in the neighborhood, after which he had the entire day to himself.

On most days, Krishnappa could be seen walking around the neighborhood, chatting with all and sundry. Even during the days leading to the recent lockdown, one could spot him chatting with the local vendors and hawkers on the main road nearby. During late afternoons, I would see him lounging on his auto parked near our compound where he would hold impromptu meetings and get-togethers with his friends.

Given the severity of pandemic and spread of COVID-19, one wonders if he should have been a bit more cautious, not ‘socializing’ as much. But it is not for us to question what, or why.

There was a flurry of activity in the neighborhood yesterday, and a few locals were seen walking around gathering near Krishnappa’s house. I suspected something afoot; perhaps he was being shifted to an ICU for Oxygen? Turns out, he had just passed away.

With the COVID-protocols in place, his body was directly whisked away from the hospital to the crematorium for a quick and quiet funeral. Unlike ‘normal,’ times no neighbors or friends around to pay their last respects to the departed.

With his abrupt passing, Krishnappa joins the thousands of unsung names and faces who are ending up as yet another blip in the great-statistical count of our generation.