Technology leaders regularly scan the landscape for trends in the marketplace, seeking clues on emerging trends. Gazing the proverbial crystal ball and divining insights continues to be an art, more than a precise science. Not many industry watchers, technologists and even tech consumers could have realized game-changing influence of iDevices – iPhones and iPads that has impacted our views on usability of computing and wireless technology in a matter of years.


A couple of weeks ago I posted on Enterprise Architects and BYOD Watch and I continue musing on the topic especially as there continues to be a lot of noise and chatter among digirati on the fate of beloved corporate tools – Blackberries and laptops. For CIO’s technologists and Enterprise Architects, the market trajectory of Research in Motion (Blackberry), Microsoft, Google et al will have a strong ripple effect.

A quick extract from Finance.Yahoo from this morning (20th July) paints an interesting view from a tech investor perspective. 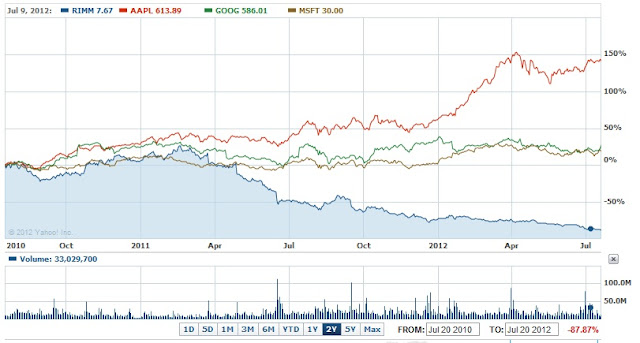 If a picture is worth a thousand words, the graph above tells a story, which I am not going to narrate. Industry watchers and analysts however continue to have a field day exploring multiple dimensions:
It's friday afternoon and I must get back to gazing my crystal ball.