Journey of an iPhone lost in an Ola Cab

A couple of days ago, my wife accidentally left her iPhone in the back-seat of an Ola Cab during a trip to Malleshwaram. She realized the mistake after alighting and immediately borrowed a friend’s phone to try and call her phone. She then called me to convey the message.

I logged into the Ola App and called the driver’s number, who responded immediately. He said he could locate the phone in the cab and had it is with him. I asked him if he could go back to the drop-point and hand it back to my wife. The driver indicated that he already had another ola-booking and had to take a passenger to Koramangala. He said he would be returning to North Bangalore later in the evening and could return the phone back to us.

I also did a quick “find iphone” to verify it was live and where the driver said he was. At this point, I was reassured that

I continued to track the phone during the day - from Malleshwaram to Banshankari, on to Electronic City, then to Sahakar Nagar, Hebbal to Banaswadi. 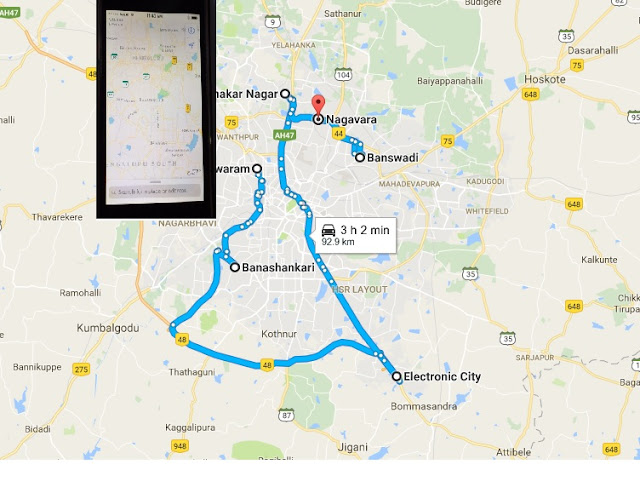 Later that evening, I called the driver who said he was in Nagvara area and if I could come there to pick-up the phone. It was well after 8 PM and I realized that although I knew the way to Banaswadi, I wasn’t very familiar with the neighborhood; and it would take at least an hour in traffic to get there. I requested him to stop by the next morning, and I would compensate him for the trip.

I called the driver the early next morning, but he didn’t take the call. I continued to call him during the day and his number was switched off.  “find iphone” showed that our iPhone hadn’t moved from the location in Banaswadi though the battery was starting to run low.

I logged into Ola App to see if their customer service could help. Under contact-us, left item in the cab option, their message is simple:

“You can view the driver details below on the screen. Please call the driver and arrange for a pickup of the belonging at a convenient location. If driver was unable to help you with your belonging, we request you to lodge a police complaint. We will cooperate in the investigation and provide the required assistance in recovering your belonging.”

I also called their customer care number and talked to an agent who reiterated the message. He said that since it was over 24 hours since I had “lost” the phone, I should file a First Information Report (FIR), after which their back-office folks would help in the investigation. On googling about similar cases, people had posted their experiences about filing a FIR with the police; hence, I wanted to do so as a last resort only since:

I decided to adopt a wait-and-watch for yet another day. I was willing to give the driver the benefit-of-doubt, especially since Ola and cab drivers do take on multiple shifts and have to cris-cross the city to earn a living. A reward for a forgotten phone is not sufficient to drive across the city and miss a peak-time earnings.  Early next morning (Day-3) I tried calling the driver, who didn’t pick up. I decided to email a complaint to Ola.

From Mohan
To support@olacabs.com
Hi
I need help in passing the message to the ola driver
I had used my ola account with phone number 974130xxxx to book a trip on 16th November.
My wife forgot her iPhone 5s in the cab by mistake. Immediately after the trip I called and talked to the driver on his number 903525YYYY. He said he found the iPhone and had it was safe with him.
The driver said he will try to contact me later in the evening on 16th. I have not been able to contact him since.
I don't want to file a Police FRI yet since the Driver seems Honest.
Please pass the message to the driver to contact me immediately and arrange to return my phone
My contact: 978789xxxx
Home: 080235xxxxx
Regards
Mohan
Trip details Wed, Nov 16, 08:25
Mini•CRN 45781ABCd
From Main Road, Sanjaynagar, Bengaluru, Karnataka, India
To 11th Cross Rd, Malleshwaram, Bengaluru
Driver XXX
KAXXXX54 . Indica

I got an immediate response from Ola Support:

Within 20 minutes of sending the email to Ola, I got a call back from the driver. He said he was in Madiwala and could return my i-phone. I said I could come and collect the i-phone, but he offered to drive down in about half-hour and suggested that I “compensate” him for the trip, which I agreed.

The driver turned up near our house in about half-hour (with a “friend”), returned the phone, collected his reward and left.

I thanked him and sent an email that “The Phone has been returned by the driver. Please thank him for the honesty and you may close the case”

Lesson learnt:
Smile on my wife’s face after she was reunited with her phone: priceless!  😄
Posted by Mohan at Thursday, November 17, 2016