With lockdowns and the pandemic slowing down life and travel as we knew it, I have been bing-listening to Audio Books during the past year. I generally listen to top-ranked non-fictional novels and most stories are transient in my mind. However, a few stories, linger in one's mind long after the book is finished.

Jeanine Cummins's American Dirt is one such novel - and not surprisingly it has received a lot of acclaim including 51,000 reviews on Amazon! 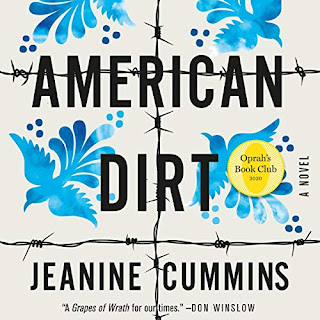 Here is my review from Amazon

I came across American Dirt while searching for my next audio book and was captivated in the first few minutes. Midway through the saga, I googled the book and realized it was a bestseller with critical reviews. I decided to tuck aside that piece of information and continued the journey with the protagonist Lydia, her son Luca and their migrant cohorts as they make the treacherous journey "El Norte."The story begins with Lydia and her eight-year-old son Luca witnessing the brutal murder of 16 of their family members while the pair have a miraculous escape. That sets in motion Lydia’s determination to escape to the US ("El Norte") with her son. We then join Lydia and Luca in their perilous journey on foot and top of goods train as they try to escape the wide net cast by a cartel boss.The saga, set in a short span of a few weeks, has a bit of everything – philosophy in the form of Lydia’s oft repeated mantra “try not to think,” suspense, crime, drug lords, cartels and drama. It also tries to give us a glimpse into the sordid state of affairs when a drug-cartel takes over a placid Mexican town. With a few characters who join Lydia and Luca in their journey, the author attempts to highlight why some migrants risk their lives to try to cross the border "El Norte."Bottomline: Follow Lydia’s advice; “try not to think” of the reviews and just enjoy a good read.