Without music, life would be a mistake – Sivamani makes an appearance at Ganesh Kumaresh Celebrating 50 years of Musical

One of my resolutions for the New Year was to take a few spontaneous breaks from my daily routine. I decided to act on this yesterday when I saw an article in the local paper announcing a concert by the Violinists “Ganesh Kumaresh Celebrating 50 years of Musical." I immediately went online and booked a ticket for the show  scheduled for the evening.

Ganesh and Kumaresh are noted Indian duo of violin players best known as proponents of modern contemporary a.k.a fusion genera of music. The dynamic brothers, who grew up as child prodigies, carved a niche in the  contemporary Carnatic genera. The brothers have gone deeper into the realm of the music and brought out a refreshingly original content and instrumental style. Fusion style includes ‘western style’ of percussion, guitars and drums played alongside modified Carnatic Ragas. The duo began the concert with a few of their popular compositions from their albums and went on to mesmerize the audience for a couple of hours.

At the end of the first half of the concert, a previous unannounced “special guest” made an appearance and the crowd burst into raptures. Indian percussionist “Drum” Sivamani took to the stage in his signature style, switching between drums, cymbals and other instruments, enthralling the audience. It was fascinating to enjoy and see the showman in action. 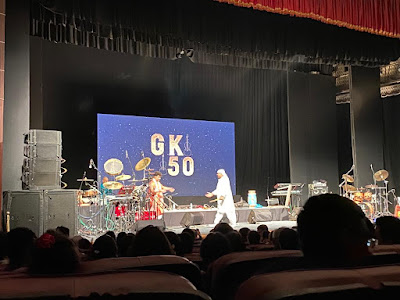 As the old adage goes, Music speaks the language of the soul. And I was glad I took the spontaneous decision to attend the concert and to be lost in the music.